Hey Media Editors, the Nonprofit Sector is Worth Following

Unfortunately, such commitment is sorely lacking around the country. While no news outlet seems to miss the all-too-frequent scandals, and many are happy to publish grip and grin photos of events – often for a hefty fee – there is relatively little coverage of community impact other than the occasional human interest story around the holidays. Movers and Shakers columns may include the appointment of a nonprofit CEO or development director, but there are few columns dedicated to nonprofit issues or proven practices.

Over the years, plenty of media sources dedicated to the nonprofit arena have cropped up. And, they never seem short of news to share. Why, then, does the mainstream media believe nonprofit news is not worth the column inches?

The impact of the sector is tremendous. Ever since Lester Salamon published his seminal work The Emerging Nonprofit Sector: An Overview in 1996, where he found among other things that one in every 6.9 jobs in the US were in the nonprofit arena, communities have been studying the economic engine that we know as nonprofit organizations. The results are nothing short of astonishing. In South Florida where I live, for instance, the latest (2006) economic impact survey conducted by the Dade Community Foundation and the Beacon Council, Miami-Dade’s “official economic development organization,” found that almost 9 percent of all corporations in the county are nonprofits and that 15.5 percent of the total gross receipts in the state were attributed to the nonprofits just in Miami-Dade County. These numbers have been growing and are expected to continue to grow. The number of registered nonprofits in Miami-Dade rose 30 percent in the seven years between 1999 – when the county began keeping such records – and the 2006 report.

Over these same last seven years I have talked to newspapers all over the country about publishing information of use to nonprofits and have been told repeatedly by editors that there is no market. I kept wondering when someone would finally 'get it.' So, three cheers for BizTimes.com. Hopefully other mainstream media will follow.
Posted by Terrie Temkin, Ph.D. at 9:01 PM No comments:

The Blue Sweater: End of the Summer Reading

In her book, The Blue Sweater, Jacqueline Novagratz, founder of the Acumen Fund, traces her journey from banking in Africa to running the Fund. The financial model of Acumen is difficult to emulate – the Rockefeller Foundation (where Novagratz has been a staff member) seeds her with $5 million dollars, and she successfully raises another $3 million –before Acumen has a name. While Novagratz's funding model is difficult to copy, the power of her relationships is not.

What else is the take away from the nonprofit leader? Her obsession to find and support actions that create real change. This book will give you a healthy restlessness to examine the result of your activities. What are your intended consequences? Are you creating sustainable outcomes? Are people’s lives changed for the better, both immediately as they solve their current issue and long-term? Do they gain skills to solve similar future challenges when they come again? Can you be more effective by slightly or significantly alternating the way you do business? As leaders in the nonprofit world doing good, Novagratz invites us to live in the harder question –are we effective?

Novagratz’s book also supports the work our firm has been doing. Instead of bandaging the symptoms, we’ve been creating donor requests that increase the organization’s capacity to improve people lives long-term. For example, with one client we’re developing a loan pool that provides the nonprofit funding relief and the opportunity for service recipients to help others by long-term recycling of the loan money.
Posted by Karen Eber Davis at 7:48 AM No comments:

Self Esteem and Non Profits

Some non profit organizations are lacking in self esteem. They quietly toil away in relative obscurity, wearing the "best kept secret" moniker as a badge of honour. While it may seem crass to "blow your own horn", that's exactly what organizations need to do in order to become more effective.
Every non profit organization has to set itself apart and prove that they are the "go-to" organization in their particular area. You have to take some risks in making your organization stand out from the crowd. Communicating the mission, vision and values and focusing on the brand of the organization will let people know about the valuable work you do. The more you can consistently tell your story, through a variety of outlets, the more you will be top of mind for clients, stake holders and funders.
Don't be afraid to stake your territory on the web. Twitter, Facebook, LinkedIn and your own website are all ways to get your message out. Make sure that everyone in the organization is following your policies on communications before they begin to "tweet" to maintain brand messaging. Register your own domain name (www.yourbrand.com) so that people can find you easily when searching.
The Internet is today's equivalent of the soapbox - get on yours and shout your mission, vision and values to the world!
Laura Mikuska
Consultant
mikuska.com
Posted by Laura Mikuska at 12:47 PM No comments:

When should you use a consultant?

Many non profits arrive at a stage where they contemplate bringing in some outside counsel to advance their development program. But is there a right time and a wrong time to hire a consultant?
Eugene A. Scanlon addresses this question in his book Fundraising Consultants - A Guide for Nonprofit Organizations. Recently published as part of the Association of Fundraising Professionals Fund Development Series, he addresses the timing and internal readiness necessary to benefit fully from a consultant's expertise.
Many of us, non profits and consultants alike, can relate to his real-life examples of his experiences, both positive and negative. If you are considering hiring a consultant but would like to assess your readiness, this book is a timely resource.
Laura Mikuska
Consultant
"Helping charities achieve their dreams"
mikuska.com
Posted by Laura Mikuska at 11:11 AM 1 comment:

Insight into the Nonprofit & Governmental Sectors

"I'm not ashamed to say that nonprofits are businesses. We employ people, we deliver services, and people pay for them (not the same people).

"....Running a government agency is about spending money. You get in trouble is you underspend, and you get rewarded if you overspend - by getting your budget ceiling raised."

Bill Milliken's book traces the development of the Communities in Schools movement. His funding base is fairly traditional fundraising: corporate sponsors, individuals, government appropriations, etc. The interesting take away for nonprofit leaders concerns program strategy and design. Communities in Schools views it work as creating a third side of a triangle of support for children to stay in school and succeed. The first two sides of the triangle are administration and teaching methods. The Communities in School side which completes the triangle is “the coordinated involvement of community members who can meet the nonacademic needs of students...” Milliken points out that when this third side of the triangle is ignored it undermines “. . .the huge and necessary investment we're making in the other two sides of the triangle.”

Do you look at the services you provide as completing a triangle (or other shape) that bolsters other investments? One recent project I helped design involved setting up services for youth in an Enterprise Zone which as one of its impacts will bolster other “huge and necessary” investments in the Zone. How does your work make the work of others more effective? Can you add a service that provides a third side to an existing but wobbly two-sided triangle?

Posted by Karen Eber Davis at 7:14 AM No comments: 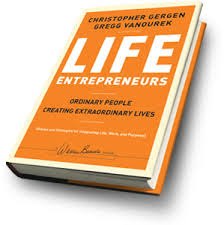 This book's foundation is 55 interviews authors Christopher Gergen and Gregg Vanourek undertake of ordinary people who live extraordinary lives. They define these as people who apply “their vision, talents, creativity and energy not only to their work but to their entire lives—changing their world for themselves and those around them.”

Is it any surprise that a review of the list those interviewed includes a large number of nonprofit leaders? As a nonprofit leader you're on the right track--keep up the good work.
Posted by Karen Eber Davis at 5:47 AM 1 comment: